Menu
Back to Books 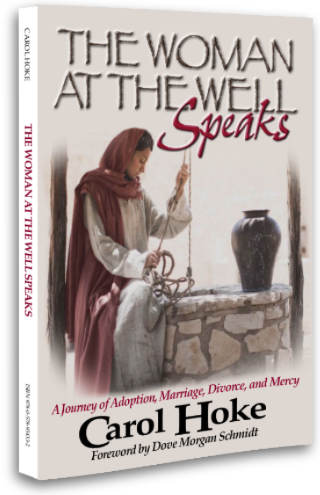 The Woman At the Well Speaks

A Journey of Adoption, Marriage, Divorce, and Mercy

In 1983, I had a dream. In this dream, I found myself being escorted by a black-haired young man wearing white trousers and a white shirt (I perceived him to be an angel), who told me to “watch and listen.”

As if I were watching a video, I saw the woman at the well (John 4:1-30). This woman, who walked in shame, alone, and confused, not understanding how this Jew (Jesus) would even talk to her, being a Samaritan. The scene began after Jesus had confronted her about her past of five husbands, her present, and her future.

The woman had left her large water pot sitting on the edge of the well, and was running back down into the town to tell the men of the city of the man she had met who told her about living water. I saw her from her back, her long, dark hair swaying as she ran. The most impressive thought of this scene was how fast she ran to spread the message of yet another man whom she had encountered. She had run after each husband to fulfill the voids in her life, and was known by her kindred and towns people as one who ran away from everything. But this time, she ran with purpose, and the good news of the Messiah.

Now, decades after a long journey of adoption, multiple marriages, divorces, and poor choices, I am beginning to fully understand the message of my dream. I am that Samaritan woman. And it has been with much spiritual warfare that I share our story.

Please journey with me, and as we do, you may be overcome by surprise as He speaks directly to your heart of things in your own life that you thought were hidden. Should this occur, allow Him to fully saturate you with His unconditional love and mercy, and then run with it and share it with someone who needs to hear.